DELCOR Family Office recently backed a funding round to develop a new Australian SuperFoiler racing series next summer following a rights deal with broadcaster Channel 7 which will once again thrust sailing back into the nation’s households.

It’s a new stage for Australian yachting in 2017, with the sport racing for the hearts and minds of a new generation of fans. 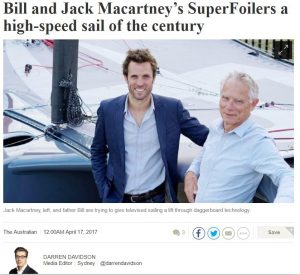 Twenty years after the last ­pictures of yachts shooting along the edge of Sydney Harbour past a crowd of thousands left millions of television viewers awestruck, a new rights deal will once again thrust sailing into the nation’s households through Channel Seven.

One of Australia’s best-known sailing entrepreneurs is mounting a comeback after raising more than $3 million from high-­net-worth individuals in a funding round late last year to develop a new Australian racing series next summer.

SuperFoiler Grand Prix is the brainchild of Bill Macartney, chief executive of the eponymous firm behind the competition, and his son Jack, chief operating officer.

The father and son have spent at least half a million dollars of their own money to bring finely tuned high-performance racing boats back to Australia for the first time since 1997, the final season of sailing’s 18-foot skiff Grand Prix.

“When we produced the 18-footer coverage we demonstrated that coverage of racing with advanced machines could be very exciting, particularly by showing the on-board experience. When we sold out of it, no one picked it up. Sailing went back to dots on the horizon, the way it has always been covered,” Macartney says.

This could be all about to change. Based in Sydney’s Rose Bay at the Woollahra Sailing Club, the family has sold TV and digital streaming rights to Seven but with a twist — the prototype SuperFoiler vessel is fast, extremely fast.

Conceived in Australia, and created by Morrelli & Melvin, a California-based designer, the three-person 26-foot machine harnesses the new world of wind-powered flying, with the highest power-to-weight ratio of any air powered boat.

The stunning ascent of hydrofoil technology, known as daggerboards, has transformed sailing in recent years. By minimising drag, these daggerboards lift the hull out of the water as the boat skims the surface, and flies through the air, riding waves and wind.

To put the SuperFoiler in the context of other racing boats, the typical speed of a 72-foot catamaran in the America’s Cup clocks in at about 30 knots. Macartney expects the SuperFoiler to achieve unprecedented speeds of more than 40 knots, with on-board cameras, mikes and low-flying drones bringing viewers close to the action.

“The great opportunity with our racing is staging extremely fast, high-intensity competition where the viewer has a genuine sense of being on board. They will be able to hear everything that is being said by the three members of each crew as they make decisions that help them succeed or fail. All that great stuff that makes for a wonderful soap opera.”

Under Seven’s broadcast agreement, covering 32 hours of programming on the network’s multichannel 7mate, eight teams will race SuperFoilers across eight iconic venues. Points will accumulate from each qualifying event, culminating in a grand final.

Each sailor on board will need to be world class. Never before has a boat been designed to “foil” from start to finish with three sailors on the trapeze. “We’re not just looking for the best sailors, we’re also looking for interesting personalities as well,” Macartney says.

Macartney has a rich pedigree of being involved in the TV and sailing industries. A former journalist, Macartney ran Grand Prix Sailing for 11 years in the 1980s and 90s, and worked in TV for more than 40 years, working on The Paul Hogan Show and World Series Cricket coverage for the late Kerry Packer.

Macartney says the inspiration for his latest venture came from watching the America’s Cup on TV with his son. “The extraordinary spectacle of those 72-foot America’s Cup catamarans ­suddenly rising up out of the water was like nothing I’ve ever seen ­before. All of a sudden we saw there was a whole new dimension to it. It was at that point that Jack and I said ‘look, this is too good to not do something about’ and we’ve been discussing a gap in the design parameters of using foils to get these machines up and flying. That gap was to do with everyone else as we perceived it putting foils underneath existing vessels.

“Which means once they were up on the foils the existing vessel became superfluous. The challenge we have set ourselves is to see what sort of performance gains one can get if you start with the foils, and then build a structure around them.”

With the inaugural competition to start on the second weekend of November, Macartney is in talks with overseas-based free-to-air networks and pay-TV operators over international TV rights.

Whether it’s extremist content at Google’s YouTube and the overstatement of ad metrics and fake news at Facebook, advertisers are having to work harder than ever to find their audience.

Amid a flight to premium content among advertisers, Macartney is positioning the SuperFoiler Grand Prix as a cost-effective marketing vehicle that can deliver powerful billboard advertising, and a compelling corporate hospitality experience.

Macartney is months away from locking in corporate sponsors for the boats and agreements with state-based tourism bodies including Destination NSW about venues.

“In a world where advertisers struggle to cut through the clutter, we think we will do even better with it second time around. This a ground-breaking machine.”