DELCOR Family Office recently acquired a strategically placed Collins Street address to meet the needs of the private families it serves. Placed between King and Spencer Street the office is placed within the growth corridor of the Financial Business district offering great upside over the coming years.

Collins Street is back in business.

By 2020 the investment bankers will pack up at their desks at 101 Collins – still arguably the best address in town  – and reconvene the millionaires’ factory across the street in an $800 million skyscraper developed by funds giant QIC.

It’s not just Macquarie other major corporates are moving all along the street. The revival of the historic heartland of Australian business is taking shape through an $8.5 billion surge of property investment over the past three years.

Known in its heyday as the home of the establishment and stuffy clubs, the boulevard is building is reinventing itself with strange new icons such as the Pantscraper tower, dramatic designs by global starchitects including Zaha Hadid, and 21st-century disrupters such as WeWork.

The original famous stretch of road got a new lease of life in 2004 with the opening of bridge at the western end, linking the riches of the city with the urban regeneration of Docklands

So now it now it stretches a full three kilometres from the leafy “Paris end” to the rejuvinated Docklands, the street is experiencing an unprecedented number of real estate deals and property developments.

The cachet of Collins Street, which is really its cultural capital, is being monetised through a commercial property boom.

“Even on this honoured and traditional street, something is happening,” Lord Mayor Robert Doyle grandly said at the recent launch of developer Mirvac’s $750 million new office tower that will rise behind the hallowed facade of the Olderfleet Buildings.

And, as the city redresses the surge in residential building Mr Doyle said it addresses the need for commercial space in the city.”

The resurgence began four years ago when resources giant BHP moved its global headquarters from the backwaters of Lonsdale street to 171 Collins street, a new tower developed by Cbus Property and Charter Hall.

The first premium tower to be built at east end in two decades, the spectacular project and has won plaudits for its high degree of energy efficiency.

And in development move characteristic of the street, the glassy 20-storey tower is set back, allowing it to incorporate the historic Mayfair building and its heritage facade.

The Big Australian’s return brings big business gravitas to Collins Street. And it’s not the only corporate heavyweight taking up new digs.

In the same block on the other side, a new headquarters for Westpac has recently been added, squeezed in behind the sombre edifice of the historic Scots Church.

The third new tower at the ritzy east end is the QIC project. It will include a hotel and high-end retail component and, like its new neighbours, the design absorbs some Collins Street original fabric: the former home of famed fashion boutique Le Louvre, as well as the street’s last remaining terrace houses.

The big money trail of deals and developments runs the length of the street. Mid-town is also undergoing a revival with the restoration of the old Stock Exchange House.

Nearby, super fund player Cbus Property has the biggest share of Collins st action, a massive 6000 square metre island site. Now a giant hole in the ground, it will soon be home to a $1.25 billion twin tower office, hotel and apartment complex joined by a skybridge, dubbed the Pantscraper.

One block west accounting firm Deloitte has signed on as the anchor tenant for the new Mirvac tower, which will incorporate the Marvellous-Melbourne era facade of the Olderfleet building.

Behind the restored street front there’ll be 58,000 sq m of pure commercial property with an ambition to earn one of the new global WELL building ratings. 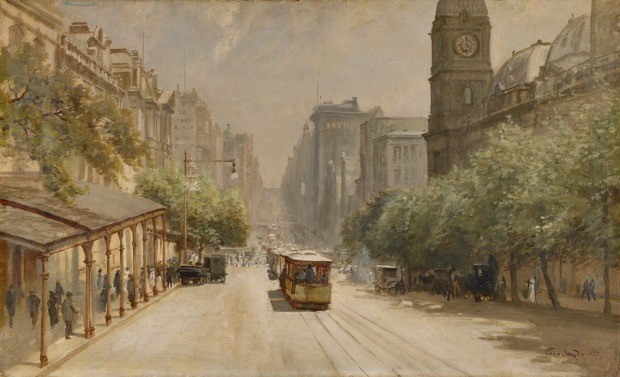 This painting by George Pownall around 1912 captures the street’s Victorian character. The view is looking west down Collins Street from Russell Street, a location still favoured by artists today.

Mirvac chief executive Susan Lloyd-Hurwitz is all too aware that winning the race for accommodation is crucial as the commercial property market nears a peak.

“Having buildings like Olderfleet – young, modern, low capex assets – is going to be the driver of outperformance,” she told The Australian Financial Review.

Further west again the rebirth of Collins Street is given momentum as it extends into Docklands.

Here vast multi-tower projects being built, including Lang Walker’s $2.5 billion Collins Square project. Next door to that is Lendlease’s $2.5 billion Melbourne Quarter project in the Batman’s Hill precinct, which combines office and apartment towers with a sky park.

Property veteran and co-founder of Colliers International Bill McHarg says that while the Docklands extension does not have the cultural clout of the east end it has been crucial to the revitalisation of the grand boulevard.

ANZ has its hulking global headquarters on the Docklands extension of Collins Street.  A second complex is now being developed next door for bank by Lendlease. US giant Invesco will fund it along with local finance house Challenger.

The new quarters has allowed ANZ to divest its former HQ together with a group of historic Gothic-style buildings back in the Collins Street mid-town section in a $275 million transaction last year.

It’s that history written into stone which McHarg and others in the Collins Street Defence Movement fought to conserve in a series of epic development battles of the 1970s and 1980s.

“The core of Collins Street has got that heritage diversity,” Mr McHarg said. “People now recognise that value.”

Not far from ANZ’s old headquarters is another piece of Collins Street history, a 1930s era building once commandeered by General Douglas MacArthur as his headquarters for US Army forces in World War II.

It was bought in 2014 by the Liberman family backed Impact Investment. Renovations at 401 Collins Street are under way and by the end of this year, another American juggernaut, co-working giant WeWork that will hang its name plate there.

Collins street will be home to Australia’s first ultra slim apartments such the super-skinny pencil tower Collins House. Elsewhere in the CBD, the rush to build residential high-rise is threatening to crowd out the commercial space needed to accommodate jobs growth.

That feeds the Lord Mayor’s desire for a balancing act.

“We are seeing a residential boom in the city,” Cr Doyle said. “But it’s very important that we keep a focus on the fact that the business of the city is business.”